Power of Faith - Christianity and Islam

Throughout Muslim lands, Christians face persecution, torture and death for "bitterly clinging" to their religion. Apostasy, converting to a faith other than Islam is punishable by death, yet men and woman still convert to Christianity in the Middle East in predominately Muslim countries. Meanwhile, Muslims face no like persecution in the West, and Islam has a tradition of forcible conversion of conquered peoples. (In fairness, Christian kings have also done so, but it is not a tenet of the faith and has not been practiced for centuries.) There is a strain of Islam today that still preaches the imposition of Islam by force.

So I ask, when one religion expands by force and seeks to prevent competition through threat of death and another religion relies upon persuasion to make its case and its believers are unwilling to renounce their faith, which religion is indeed more powerful?
Posted by B-Daddy at 1:36 PM No comments:

At TLT the weekend's music came from Iggy Pop, because I had tripped across him looking at my glam play-list. Over at BWD, Dean is doing a poll on cover vs. original, so I thought I would do the same. I am posting Iggy Pop's The Passenger again, along with Siouxsie and the Banshees 1980s cover. I will put up a poll at right.

Sampled Avery Brewing's Salvation - Belgian Sytle Golden Ale. It was a little lighter in color than some other Belgians I have sampled. I admit to not being a big fan of this style in the first place, but really enjoyed this ale. The label is a bit tongue in cheek, calling itself the "Holy Trinity of Ales."

Waynok and I sampled from the 22 oz bomber, which had a nice clean pour, not much head. What struck me right away was the spicy flavor to this beer. Even though the label touts apricot and peach flavors, the cinnamon is what I first noticed, along with the higher than average ABV at 9%, it also has a little more hoppiness than the standard Belgian. The peaches came through more in the aftertaste. It also had a very full feeling while drinking it, insisting that it be sipped. This is a nice after dinner beer, very full and flavorful. My grade is an A-.
Posted by B-Daddy at 10:28 PM No comments:

Road Dawg urged me to revive this blog, so I have. Plus it gives me a chance to post more music. Doing 90s grunge at TLT, so wanted to continue a little in that vain.

Greenday may not be "officially" grunge, but I associate them temporally with that era.

The B-Daddy Book of Management 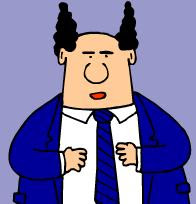 I have had some success as a manager, which always amazes me. I am not a particularly brilliant leader, but I have had great people working for me, making me look good. I have a few simple ideas about management that I want to record for posterity. If I get around to it, I will flesh out some of these ideas and perhaps add to them in future posts.

Rules of B-Daddy's Book of Management.

1. Plan to do nothing, and you will certainly achieve your goals.

2. Management is hard, leadership is better and supervision is most difficult of all.
Corollary: Hire people who don't need supervision.

3. Hiring is the manager's most important decision.

5. The commodity in shortest supply is management attention.
Corollary 1: The most important word in a manager's vocabulary is "no."
Corollary 2: Email is an evil leach of your time.

7. Understand your firm's economic engine and your unit's.

8. Be careful what you ask for, you just might get it.

9. Deliver the bad news yourself, let your people deliver the good news.
Posted by B-Daddy at 12:06 AM 1 comment:

Email ThisBlogThis!Share to TwitterShare to FacebookShare to Pinterest
Labels: Management

Sonos is the Bomb

Today I am reviewing one of the most unsung yet amazing tech products ever invented. Of course, I am referring to the Sonos music system. Not much to look at, 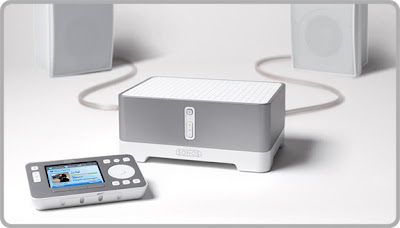 but a great product. In fact, it is the only thing we have ever purchased that actually improved over time. Here is how it works. The Sonos is a device to play music from the computers in your house, or the internet. No need for stereos, cd players, iPods, or radios any more, just one box with speakers (or several boxes), and an iPod like controller. At first the Sonos could only play music we had ripped to the computer. Later, it added various subscription music services, like Rhapsody. Initially the Rhapsody required the computer to be turned on to work, but later Sonos changed the software to allow Rhapsody streaming directly to the Sonos. Later radio stations, either local or worldwide were added to the mix. You can still attach your iPod or other device.

Our system has four boxes, that can operate independently, or in any combination. All four together is party mode. They communicate wirelessly, requiring only the connection to power and one or two sets of speakers. This gives maximum flexibility in their placement throughout the house. If you have a backyard party, you can just move the box and speakers outdoors. Speaking of parties, you can build playlists consisting of hundreds of songs themed for the party and can mix between streaming and home computer sources for the music. (For the very nerdy, you can even play from independent networked attached storage or an iPod you connect to your network.) We have a Halloween themed list that starts with the Monster Mash and has the Bloodletting by Concrete Blonde, for example.

Other amenities include a search function for Rhapsody that often finds obscure or hard to find songs. (Rhapsody requires a $12.99 per month subscription.) You can also download controllers that operate on the computer (Mac or PC), so the family doesn't have to fight over the one controller. It also has a simple equalizer if you need to adjust the sound.

As I said, this is the most amazing tech acquisition Mrs. Daddy and I have ever made, we recommend it highly.


FTC Disclaimer: I may or may not have received valuable consideration in the form of swag, jack and/or coin to endorse these products. I am not saying and have the right not to do so.