Memorial Day's origins are rooted in the Civil War, where a larger percentage of nation's young men were killed than in any other American war, before or since. The war was gruesome, long and cruel. Like all wars, it solved nothing, except for ending slavery and redefining the nature of our union. The Commander in Chief at the time explained the causes as follows:

One-eighth of the whole population were colored slaves, not distributed generally over the Union, but localized in the southern part of it. These slaves constituted a peculiar and powerful interest. All knew that this interest was somehow the cause of the war. To strengthen, perpetuate, and extend this interest was the object for which the insurgents would rend the Union even by war, while the Government claimed no right to do more than to restrict the territorial enlargement of it. Neither party expected for the war the magnitude or the duration which it has already attained. Neither anticipated that the cause of the conflict might cease with or even before the conflict itself should cease.

It was originally known as Decoration Day, and arose out of the practice of decorating the graves of dead soldiers on both sides of the conflict. From the Wikipedia article:

The Memorial Day speech became an occasion for veterans, politicians and ministers to commemorate the war--and at first to rehearse the atrocities of the enemy. They mixed religion and celebratory nationalism and provided a means for the people to make sense of their history in terms of sacrifice for a better nation, one closer to God. People of all religious beliefs joined together, and the point was often made that the Germans and Irish soldiers had become true Americans in the "baptism of blood" on the battlefield. By the end of the 1870s the rancor was gone and the speeches praised the brave soldiers both Blue and Gray. By the 1950s, the theme was American exceptionalism and duty to uphold freedom in the world.

To commemorate this day and the war in which it originated, I am linking this video. The volume is a little low, so you will have to turn it up.

Link Love for a New Blog

There's a new blog in the B-Daddy family, Elecman's Tower. Check out mew2ds' take on all things videogame, or as we like to say, gameage. I will be adding a permanent link at the side.
Posted by B-Daddy at 12:54 AM No comments:

Just because I'm so happy with my new computer:

Windows on iMac - This is the Bomb! 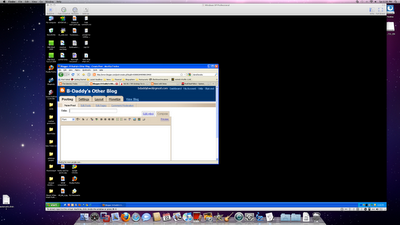 I am a long time Windows user who always had trouble getting used to the MAC operating system even though there are two Macs in the house. On Friday, I bought a new iMac, because I thought it would actually be easier to transition my work to the iMac instead of a new Windows machine. This is due to the magic of VMware Fusion. I loaded up the VMware product on my iMac as well as some enabling software on my old Windows machine. I kicked off a program overnight and voila, an image of my old machine was now on my iMac in the morning.

This was a far easier experience than I have ever had when buying a new computer. There were a few hiccups, but they weren't too bad.
1. Nobody mentioned that I would have to disable the firewall on my old Windows machine.
2. Windows wanted me to re-register the operating system. It took a while to figure out the magic words to say to get them to give me a new product key.
3. I am still having a difficult time dragging and dropping out of Windows to the Mac. Works great the other way.

The Windows image starts up way, way faster than on the original hardware. Now I have the best of both worlds on a blazing fast iMac (quad core, 8Gb Ram, 1 Tb hard drive.) Certain programs, like my smart card reader and middleware, that don't run well or at all on the Mac run just fine. Don't ask me how the underlying Mac can't run something that Windows image can.

The iMac itself is a marvel of spare design and simplicity, there are almost no wires on my desktop, making Mrs. Daddy very happy. The screen is huge and the processing fast.

FTC Disclaimer: I may or may not have received valuable consideration in the form of swag, jack and/or coin to endorse these products. I am not saying and have the right not to do so.
Posted by B-Daddy at 6:00 PM No comments:

I know this has been posted elsewhere, but had to share for this weekend's video. If you haven't seen it, this is must see red meat for conservatives, enjoy!

Email ThisBlogThis!Share to TwitterShare to FacebookShare to Pinterest
Labels: masculinity

This weekend's music is probably a re-run, but with the British elections winding down, I wanted a Brit theme and this is my favorite song by the Clash.

One of the catch phrases my youngsters use is "GARBAGE DAY." It comes from this perfectly horrid 80s movie, Silent Night, Deadly Night 2." Here's the infamous clip:

Mrs. Daddy felt a little like the poor anonymous schlub to takes the bullet after an encounter with our city's fine sanitation workers. Last week, after the regular garbage pick up, she walked out to find garbage from our can strewn about the street and what had been a heretofore perfectly usable "black refuse container" was now cracked beyond use. Being the trusting fool that I am, I calmly told Mrs. Daddy to give the kindly folks at the city's collection services a call, and that all would be made right. Certainly, since the city's refuse collectors had been a wee bit clumsy with our container, we would be provided a new one. Instead Mrs. Daddy was harangued mercilessly for what seemed like an interminable part of her life as to why the city would have to charge her for a new container, and how they would have to charge her for delivery (total $95.00) and how she couldn't pay on line, she couldn't pay over the phone and if she wanted to use a credit card she would have to drive to their office.

I feel lucky that my wife didn't harm herself in a desperate attempt to gain relief from the hideousity of the bureaucrateze to which she was subjected. (Some of those words don't spell check, but dang it, they should.) Here is the helpful explanation for all of this from the city's very own web site (they're mighty proud they have a web page, even if it can't take credit cards.)

Refuse containers damaged in the regular collection process will be charged prorated replacement costs. Containers in use for more than 10 years will be replaced for $70 plus delivery, if applicable. Containers within the 10 year lifespan will cost a prorated fee based on $7 per year, plus delivery charge if applicable. Call customer service at 858-694-7000 for amount if damaged lost, or stolen container was used for less than 10 years.

That clear enough for you? To quote Iowahawk, "Pay Up Sucker."