My nephew, Kevin, is a talented young musician. He will be playing guitar in a production of Tommy by The Who. We were discussing Pinball Wizard, and decided that deciding between The Who and Elton John for best rendition was the most difficult covers question we had ever heard. So I leave it to the readers to decide.

Time Warner Cable (TWC) is the worst service provider ever. I have had nothing but problems with them over the years, but lately it has just gotten worse. As soon as AT&T U-verse comes to my neighborhood I am going to switch service. A brief litany of their stupidity.
Why they stay in business is only because the city grants them a monopoly as cable provider in their service area. I wouldn't invest in their stock, because if we know anything about technology, its that technical change disrupts monopolies.
Posted by B-Daddy at 9:20 PM 1 comment: 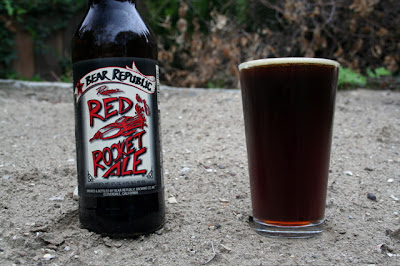 Yesterday we had a little barbecue and Dean brought by one of my favorite beers, Bear Republic's Red Rocket Ale. Someday I'll get around to a top 10 beer list, like Max, but this ale would certainly be on it. (Off the top of my head, I would also include Deschutes Mirror Pond Pale Ale, Avery Salvation Golden Ale, Delirium Tremens, Alpine Ale, Shiner Bock and Highway 78 Scotch Ale.) Bear Republic also makes an excellent IPA, Racer 5.

As you can see from the picture, Red Rocket pours a dark amber-brown, with a head that is full but disappears quickly. But don't let that fool you, it's full of flavor. It has just a hint of sweetness to balance much more hoppiness than expected from an amber ale. Red Rocket is fairly complex, and always takes me a few sips to absorb all of the different flavors embedded. At 6.8% ABV, its not too boozy so its a nice companion to a bbq meal especially steak. Although not a San Diego beer, it is from California, Healdsburg to be specific. Craft beer is one of the few growing industries in our state, and also the least regulated, figure that.
Posted by B-Daddy at 9:15 PM No comments: