We're doing Steve Miller this weekend, because he's great and the Mighty Waynok likes him too. This was the best sound quality I could find for Abracadabra, I have no idea what message the video is supposed to convey.

What We Learn From Team Sports 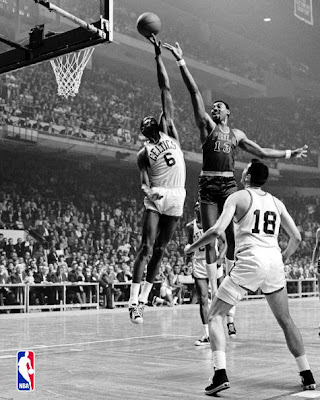 I have played team sports all of my life, and still do, even if only in pick up games of basketball. I believe strongly that God has used this to make me a better person. At it's best athletics are an almost a religious experience. Consider these quotes from Bill Russell in the The Fifth Discipline:

Russell is careful to tell us that it's not friendship, it's a different kind of team relationship that made his team's work special. The relationship, more than any individual triumph, gave him his greatest moments in the sport: "Every so often a Celtic game heat up so that it became more than a physical or even mental game," he wrote, "and would be magical. The feeling is difficult to describe, and I certainly never talked bout it when I was playing. When it happened I could feel my play rise to a new level . . . It would surround not only me and the other Celtics but also the players on the other team, and even the referees . . . At that special level, all sorts of odd things happened. The game would be in the white heat of competition, and yet I wouldn't feel competitive, which is a miracle in itself . . . The game would move so fast that every fake, cut, and pass would be surprising, and yet nothing would surprise me. It was almost as if we were playing in slow motion. During those spells, I could almost sense how the next play would develop and where the next shot would be taken . . . To me, the key was that both team had to be playing at their peaks, and they had to be competitive . . . "

Sports can elevate our very lives, lifting us above the hum drum routine of our lives. Speaking as a man, I know I need that.

But team sports also make us aware that our greatest achievements are not as individuals, but as part of a team, making those around us better as well. More from Bill Russell in the same book:

"By design and by talent," wrote basketball player Bill Russell of his team [the hated] Boston Celtics, "[we] were a team of specialists , and like a team of specialists in any field, our performance depended both on individual excellence and on how well we worked together. Non of us had to strain to understand that we had to complement each other's specialities; it was simply a fact, and we all tired to figure out ways to make our combinations more effective..."

We realize that our role is important even if not visible and that our most important role is to learn to work together with our team mates achieve our mission of winning the game.

Participation in team sports also undermines racism, no small achievement. When I worked at U.S. Strategic Command years ago, we heard one of these professional racism lectures tell us what a bunch of racists we tended to be. He was making his pitch pretty reasonably until he ventured out on this limb, telling us that if he went out on the basketball courts at the massive gym (converted from an aircraft manufacturing plant) at Offutt AFB, he would see segregated basketball games. I knew then what an out of touch moron he actually was, because our lunch leagues were as integrated a group of teams as you could find in America. Our loyalty was to our team not our race; we just wanted to win.

Finally, team sports reinforces the sportsmanship that is at the heart of Americans. During the game we play hard, but by the rules. And we voluntarily play by the rules, not because the referee will blow the whistle, in the pick up game, there is no ref. But because we want our victory to be free of taint, because it is just the right thing to do. Once the final whistle blows, we can shake hands on a game well played and walk away, without any animosity in our hearts, the very model of Christian attitude. I think this last bit has been lost in professional and college sports. A team may win on an obvious fifth down in football, players flop to draw fouls, animosity by fans continues after the game. Americans could improve their sportsmanship, I believe. But sports are still a great crucible in which to forge character.
Posted by B-Daddy at 9:08 PM No comments: 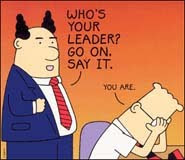 What is wrong with managers? Over at KT Cat's place, he has been lampooning all manner of management practice including Lean Six Sigma and corporate pronouncements on, well I can barely figure it out. Managers are forced to read a lot of theory and swill a lot of jargon to keep up with the latest fads imposed from above. But it baffles me that managers try to feed the same jargon to employees who frankly just want to do their jobs. I hope that he doesn't mind that I am lifting this video he made with xtranormal:

Almost everything discussed in that unintelligible video actually makes sense or does some good. But the managers who allowed that crap to get published make themselves appear to be fools. Why can't we managers talk like this:

"We use the Balanced Score Card (BSC) to make sure we don't forget ALL the ingredients of our success by too much focus on one area. We balance keeping our customer happy, keeping our costs under control, developing our people's talents, and improving the way we do our work, all of which will help us accomplish our mission."

"Being a high performing organization means that we stay focused on the work that actually contributes to the products our customers want, and seeks to eliminate work that doesn't help achieve that end." 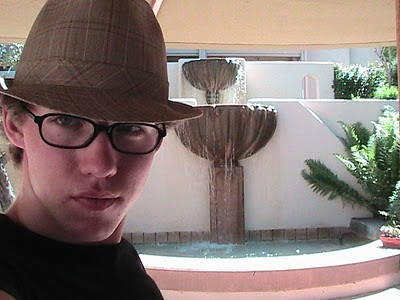 I'd like to announce a new blog, Project Scatterbrain, written by the Mighty Waynok. As he states in his first post, it will NOT be a political blog. But amazingly enough, his second post hits on sports. I'll let you figure the familial connection. If you ever forget how to get there, he is linked at right.
Posted by B-Daddy at 6:44 PM No comments:

It's an REM weekend. We've got the end of the world on The Liberator, here they are again liberating Europe from tyrannical radio, or something. By the way, what's a hib-tone?

I guess it's my week for Celtic music. I've got Enya playing on The Liberator Today and Loreena McKennitt over here.

Proflowers.com Is Unethical - Avoid Them

Mrs. Daddy recently ordered flowers for a friend from the Proflowers.com web site. Next thing we know, we are enrolled in something called Encore Marketing Easy Rewards program and monthly billing has commenced against our credit card. This was certainly not authorized, and these jackals have been sued for this before. The way it works is that you are asked if you want to "earn" $15 savings, once you click yes, without any terms or conditions offered, a new window popped up. Mrs. Daddy closed that window, but we were billed anyway and more worrisome, our credit card information given to another business. I have filed a complaint with the California Department of Consumer Affairs and posted a bad review on line, but just wanted to warn my readers. This isn't the first or even second case I've had of fighting on line fraud, and I am going to keep fighting back. Hope some jackass from their company reads this and tries to sue; even if Google takes down this post, it is going to cost proflowers far more than any business they ever get from me.

As a manager, I question why a legitimate business would go down this path. They are clearly going to get smacked down and it will ultimately ruin their brand name. As folks get motivated to fight back.
Posted by B-Daddy at 2:53 PM 2 comments: 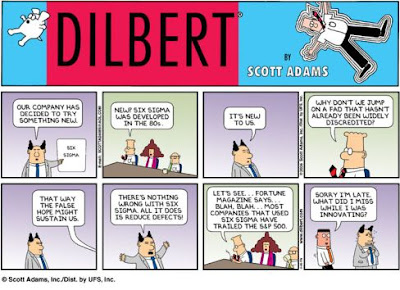 KT posted a hilarious video on Lean Six Sigma (LSS), a method embraced in industry and government for process improvement. I went on an extended rant in KT's comments section which I have liberated to a post here.

My experience with this method of process improvement has been uniformly miserable, failing to achieve anything of significance. Recently I was again provided the results of an LSS effort that again resulted in a new process but no reasonable method of implementation. This is the third time in a row. Each time we are asked to then build an information system to implement something conceived by LSS, and we have to start over. I was told that, at a minimum LSS would deliver "shovel ready" requirements against which software could be delivered, but that has not been the case.

The root cause of this failure initially eluded me, because I don't believe that anyone is intentionally stupid or malicious, but you can't tell by the results of LSS. Thinking about Stephen Covey's 7 Habits helped me dissect the mystery. Habit 2, begin with the end in mind, provided the insight. LSS, by its nature, starts with no particular end in mind, just the idea of improvement. As a result no actual improvement comes from this undefined goal.

A brief example. We set a goal that over 80% of new employees would have a functioning email account and computer account on their first day of employment. We made significant changes in the way we performed initial information assurance and other training and achieved that goal. We are trying to ratchet up to 85%. But we get no credit for huge process improvement that has saved millions of dollars in lost productivity because employees previously waited around for up to two weeks before they could use a computer. Sorry, no LSS credit for the poor slobs who did all the work to save the organization millions (and I can prove it.) (Achieving LSS savings is often put into employee objectives. In this case, we started with a particular goal and actually effected process improvement, because we knew where we wanted to go.
Posted by B-Daddy at 7:00 AM 4 comments:

This movie was the funniest send-up of a genre I have ever seen. You can watch the whole thing on Stage Vu.