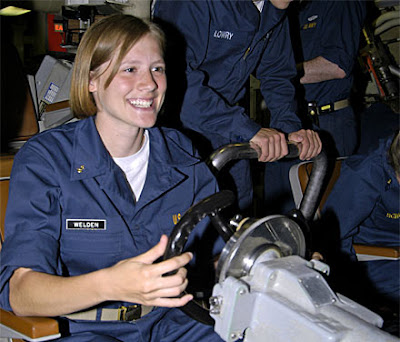 I have been called out, to respond to the CNO's recent announcement that women will be taking their place on U.S. submarines, finally getting the glamor assignment that years of male chauvinism has denied them. My initial reaction that I sent 'Dawg requires a little elaboration:

It's a mentally rough, confined life, where the abrasiveness of close quarters is more than the average guy can handle. Don't see how this will go well. Also, the fact that they are only going onto SSBNs is a career killer for the female officers, because you need both SSN and SSBN experience to understand that particular warfare environment. The Navy has no money to modify the SSNs in a way that would be acceptable, the CNO is blowing smoke.

With regards to career path, SSNs are nuclear attack submarines whose primary mission is to search and sink other submarines, often the SSBNs (Nuclear Ballistic missile carrying with nuclear propulsion, I dare Bush to say that fast.) The rhythms of the two types of submarines (ignoring SSGNs for the moment) are very different. The SSBNs operate on a very predictable 112 day patrol cycle, alternating crews. SSNs operate typically in a two year cycle that includes a major 6 month deployment, but their schedules are very unpredictable. Because of the different missions and optempos, service on both platforms is considered necessary for promotion, and more importantly, should be considered for promotion. This will put the women at a disadvantage. I also know that redesign of the already extremely crowded attack subs is not in the cards. The Navy has no spare cash for this, and the Congress isn't going to cough up the bucks.

The other reality of life on a submarine is that it involves living in very close proximity to your shipmates for extended periods of time, with nowhere to go to get away from them. It's hard to explain the toll that a lengthy patrol underwater takes on the psyche. I am ill qualified to know how mixing late teen and early twenty somethings in a pressure cooker environment will turn out. My guess? Usually ok, because of the caliber of our people; but occasionally off the rails, because they are still only human. 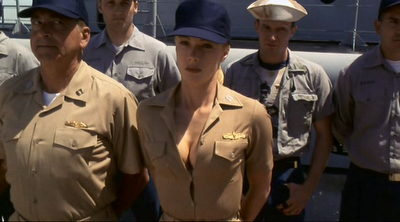 Finally, it will make leading submariners, always a challenge, just that much harder. Not a legit argument against, just a fact. But the hypocrisy of this plan is telling me that the Navy is doubling down on political correctness.

In case you were wondering about how this would all look; the image at top is of an actual midshipmen on a submarine, the image at bottom is from a movie.
Posted by B-Daddy at 10:40 PM